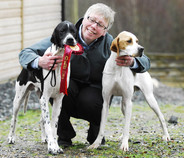 Established in 1971, Raigmore has been the home to several breeds of gundog. Initially starting with show Cockers, over the years we have also owned English Setters and working Cockers which we worked regularly on pheasant for several years. However in the late '70's I saw a stunning Pointer in the Gundog Group at a show and I was smitten. Since the purchase of our first Pointer back then we have bred several litters over the years and now only have Pointers. We moved to Loch Fyne a few years ago to give us more room for our expanding kennel.

JOY'S PUPPIES HAVE ARRIVED - ALL 13 OF THEM!
We have some boys available.